Two nominations were received and accepted for ‘Life Members’ at the recent AGM. 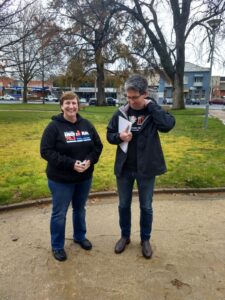 Megan is a huge factor in our Club’s success over the last decade. Listed below are on some of those things:

Season 14/15 Secretary; Season 14/15 Club person of the year; Season 15/16 Treasurer, in handover from Dan Miller; Season 15/16 represented Australia in World Duathlon champs in Adelaide; May 2018 in National Volunteers Week, of all the volunteers across our sport in Australia, Megan was chosen by Triathlon Australia to be recognised on their social media for her awesome triathlon support; Season 18/19 Award from Life Members

What she does: in 3 parts: race day, administrator and governance through the year, and personal performance

Race day for the club

Volunteer at every event of OTC –

Friendly face at registration before our events; If not competing, rowdy and conspicuous supporter during our events – in her trademark orange plats, hat and skirt; Chief cheerleader and motivator often heard yelling ‘Get your butt moving ….!’; Timekeeper at the end of our events and then pack up; Publisher of result posts after our events; And if not competing, for non Orange events, she is the keenest supporter, promoter, organiser for all events in town, out of town, interclub, qualifying events, club champs, world champs.

Administration and governance for the club

Role as long term Treasurer of our club –

Long term committee member and volunteer of a huge amount of hours; massive work with grants, registering GST and controlling grant funds for recent projects and getting financial books ready for audit; organises supporter kits and is author of the annual Port Macquarie Ironman and 70.3 Athlete and Supporter guide which greatly received by all Club members who attend this event.

On the performance front, Megan has some residual symptoms from Acute Disseminated Encephalomyelitis which caused damage to the central nervous system, causing her to need to take great care not to raise her core temperature. Megan still gets into her events, and for hot ones, wears an her ice vest. There’s times she can’t help herself and her core temperature limits get too high. There have been times when she has been helped out of the pool after a swim set. She is a warrior with a huge heart and never gives up.

Megan is and has been an outstanding servant of our Club and its members and a wonderful member of the Orange community. “Stuff” happens when Megan is involved – she is a real doer. Administrator, auditor, author, cheerleader, marshall, motivator, publisher, registrar, timekeeper, treasurer and triathlete, there are a huge number of hats she wears.

Her distinguished service to our Club has earned her the title of life member #3 of Orange Triathlon Club. 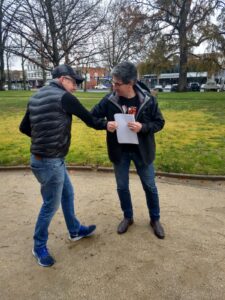 Similar to Megan, Phil has been a huge contributor to the Club’s success over the last decade. Listed below are on some of those things:

2013/14 Club Person of the year; 2015/16 Award from Life Members; President 2018/19, 2019/20 and 2020/21; Orange Juniors Triathlon Festival 2016 -2019; Instigator and organiser of OFO, ODO, OMO, OCO Ronde van de Knob, Hills of Orange; Sponsor of Tour de Cure ride in Victoria; Instigator of charity donations to Give me 5 for Kids, Cancer Council and Tour de Cur; Always there at events and for setup, Race Directing, pack-up, wrap up and inspirer of other Club members to help him organise events; Liaison between Police for event approvals; Lead the Interclub Presidents committee for the last few years.

Race day for the club

Long time Club Race Director and Race Co-ordinator;  Sponsor, helper and promoter of the Orange Triathlon Club like for many years; Always there at events and for setup, pack-up, wrap up; Liaison between Police for event approvals;

Working for the club –

Doer of lots of club stuff such as courses, approvals, club kit etc, Provider of bike rooms, Computrainers, Gators, Supporters and helpers Nick, Flick, Jared, Olivia, Tom, Jessie and whoever he can lobby; Worked hard to promote the move from Lake Canobolas to Gosling Creek;  Promoted meat raffle which has contributed to Club funds and resources for years;  Head scrutineer for event set up in Robertson Park.

Personal performance
Represented Australia at the 2018 ITU World Triathlon Championships – Age Group Sprint Distance – on the Gold Coast; So many representations for club at Central West Interclub; Cycling events and away races; Represented Australia at the Ironman 70.3 World Championships in Mont Tremblant Canada in 2014; and on a very personal level – completely stuffed the Interclub Point System to some random Phil Tudor method that no one understood … based on variations between poker machine odds, golf handicaps, rugby points system and who knows what else!

Phil has been an outstanding contributer to our Club and a valued member of the broader Orange community. Phil is an all ’round Good Bloke who has lived Orange Triathlon for many years. He gets things done and has been very generous to the Club. Similar to Megan, Phil wears many hats and is is involved in many aspects of club life.

Phil’s extensive service to our Club has earned him the title of life member #4 of Orange Triathlon Club. 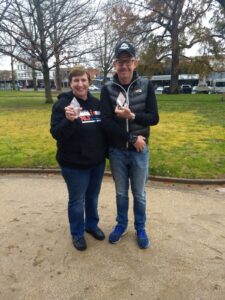 Orange Cycle & Triathlon Club is a family oriented community that caters for the young to old, and beginner to elite triathlete.

We provide a strong triathlon program through the season that encourages inclusion and participation and we have an off season.

We promote a healthy lifestyle and support for our triathletes to achieve their best.